Large equipment is switched on and off all the time, and when that happens the power line sputters with bursts of pulses.  These are electrical fast transients (EFTs) that can upset an electronic device.  Elite’s Tom Klouda and Tom Braxton are back with the second installment on transient events and their testing techniques. Read Part 1 and Part 3, Part 4 and Part 5.

The IT manager at Hypothetical Tech’s branch location is talking with his colleague at the home office:

"We settled into that new office park.  It’s the space next to the campus HVAC plant.  Lots of room, and we’re in business!  Well, except Tuesday -- four terminals crashed and we had to reboot.  Then on Friday it happened again, and we checked for lost data.  While we were down the folks in the HVAC plant came by to visit while they waited for their system to start up.  Nice guys.”

Does any of this sound familiar?  It’s what can happen when digital systems are hit with an electrical fast transient (EFT).  That HVAC plant next door had large blowers with hefty startup currents.  When the switch closes and the motor commutators start connecting, voltage spikes flash through the building’s wires.

High-current motors are a common EFT source, as are the switch contacts themselves.  The sudden voltage change is like striking a bell – a series of bursts, each of which linger until the energy has run out.

Think of an old-school desk telephone with a mechanical bell.  The bell rings in repeating bursts and generates an acoustic waveform like that shown below.

In an EFT event, the current from the sudden surge splatters through the conductors' natural resonance and sends bursts flowing into devices connected to the common power wiring.  EFT bursts are electrical, not acoustic, but the pattern is similar. The EFT voltage bursts resemble the acoustic bursts of the ringing bell.

The International Electrotechnical Commission (IEC) characterizes EFT bursts in standard 61000-4-4.  Like most standards, the electrical specifications are tightly defined.

The staccato bursts of voltage in the field are like snowflakes: they are never quite the same twice.  But they do have common characteristics that are standardized to allow repeatable testing.  Each individual pulse has a waveform defined in IEC 61000-4-4, shown in the image below:

A series of these pulses are sent into the power line at a designated repetition rate, forming a burst of a specified duration, which is then repeated at 300ms intervals and resemble the telephone-bell acoustic pulses shown above:

The voltage levels and repetition rates of the bursts are set based on the severity level appropriate for the equipment under test (EUT) and are run for a minimum of one minute.

As with any immunity test, a test plan is needed to assure the product is receiving a realistic approximation of what happens in its intended environment.  The test plan would include a description of the product, its configuration during the test (connecting equipment, cabling, active software, etc.), and the criteria for failure conditions.

The test plan and the description of failure criteria are important.  During the application of the bursts, the EUT is monitored for correct operation.  If the EUT reacts to the bursts, is it a failure or a benign response?  For example, flickering display lamps may not count as a failure for some consumer products but may be critical for medical equipment.  Whatever could be regarded as a failure needs to be described in the test plan.

Not all responses can be known ahead of time, so someone familiar with the EUT should be present during the test to watch for anything unusual.  Any response should be documented for later analysis.  It’s obviously important for the EUT’s designer to know how the product responds to these kinds of transients.

Applying the burst to the equipment under test (EUT)

The burst defined in IEC 61000-4-4 is applied to the EUT through its external cables.  The EUT’s vulnerability is tested by connecting the burst generator to the power cables through a coupling-decoupling network (CDN). 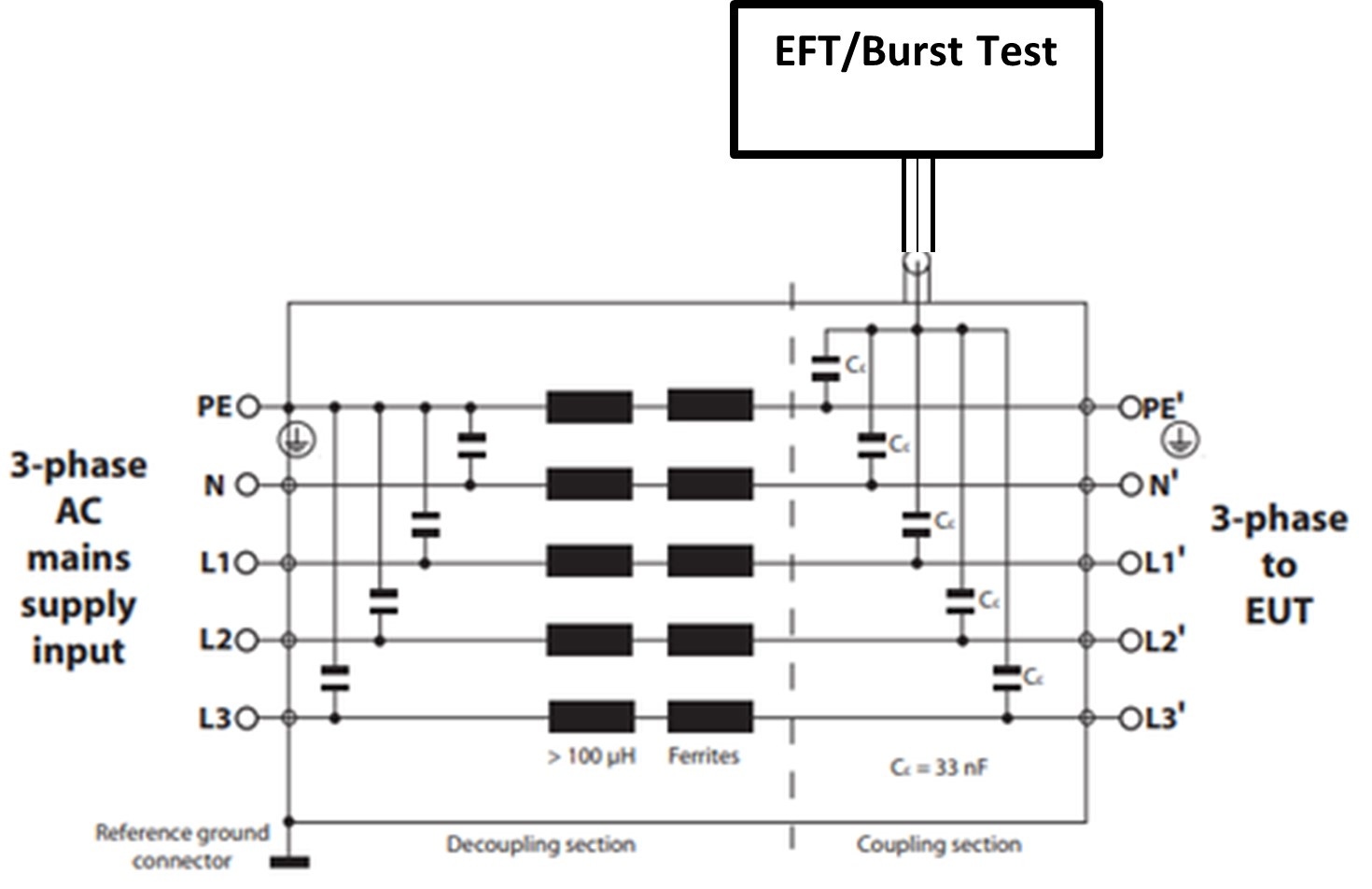 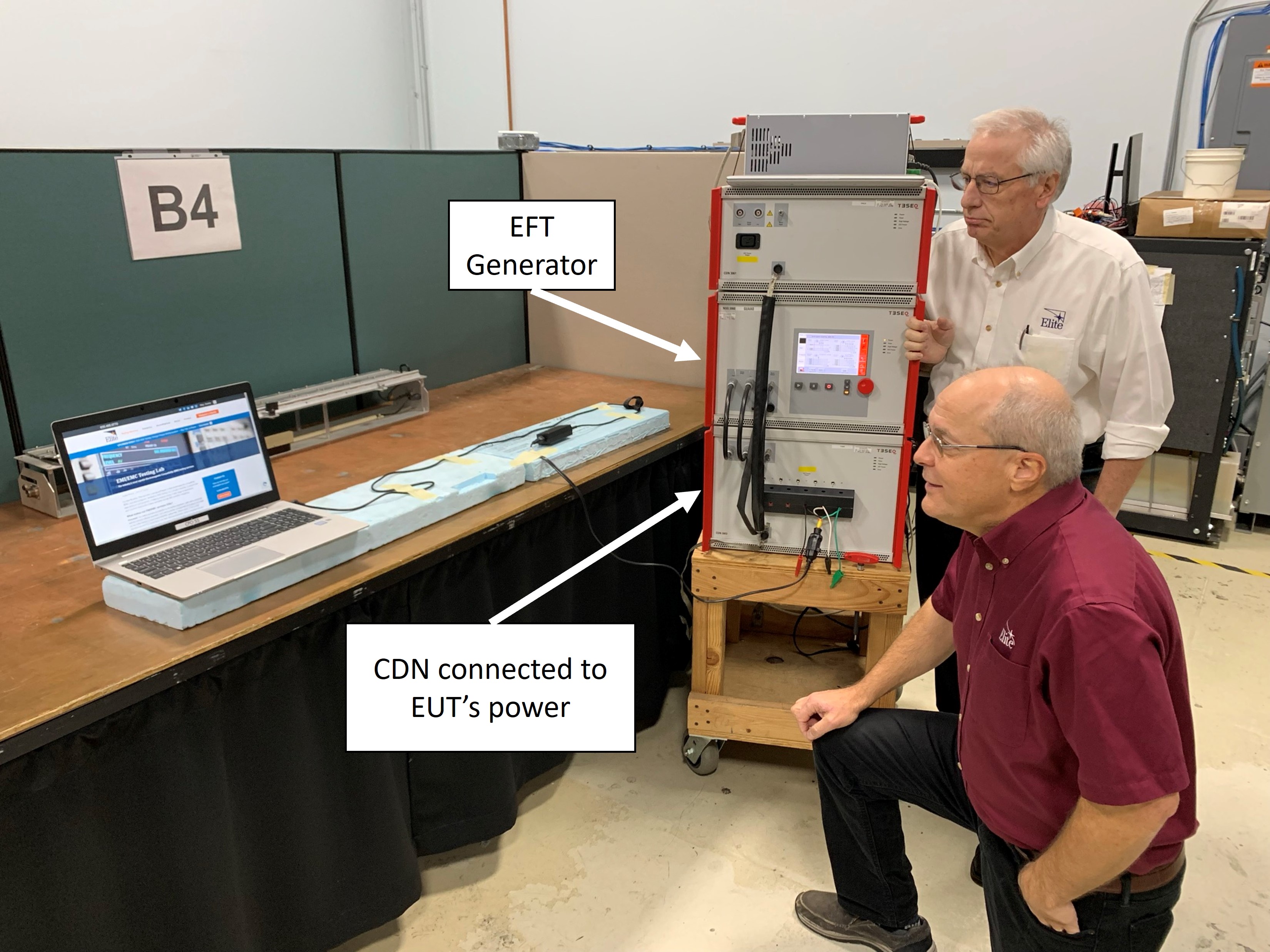 The next image shows how the burst is applied to signal cables in a tabletop configuration.  The cables are laid inside a coupling clamp that capacitively applies the burst.  The photograph shows a typical configuration. 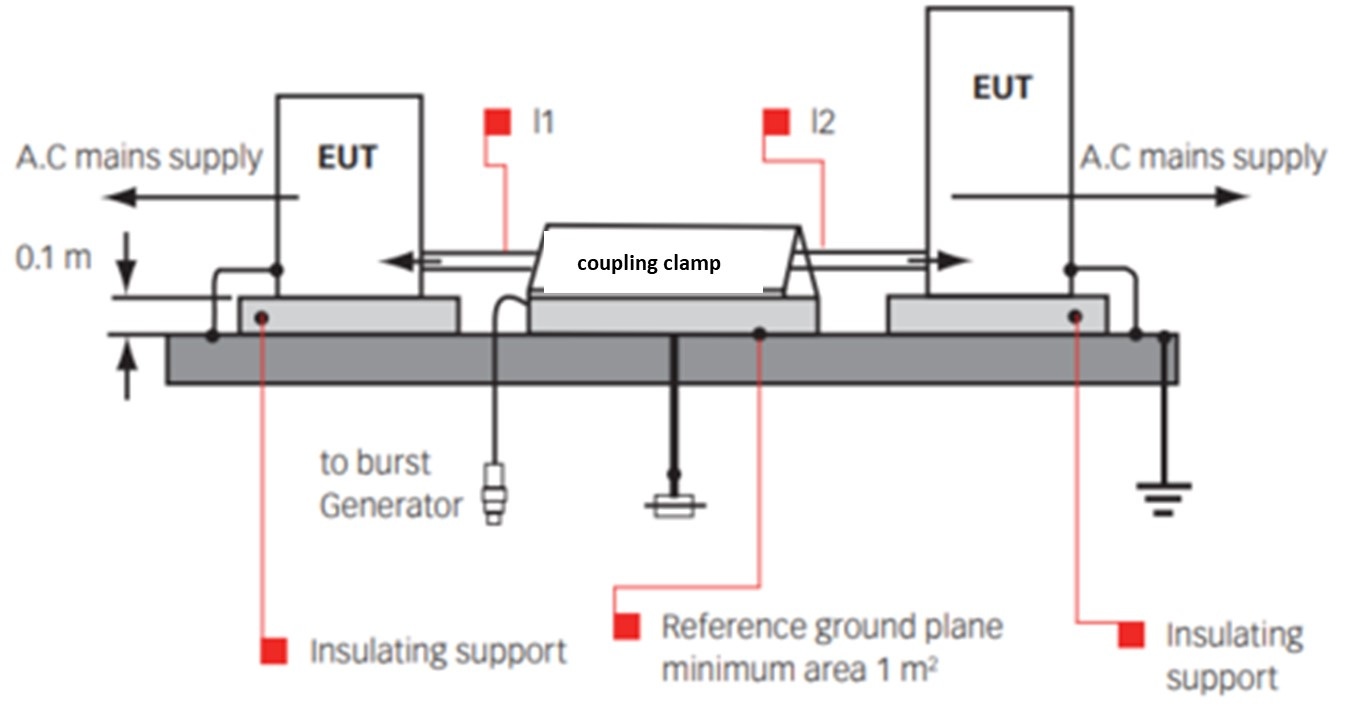 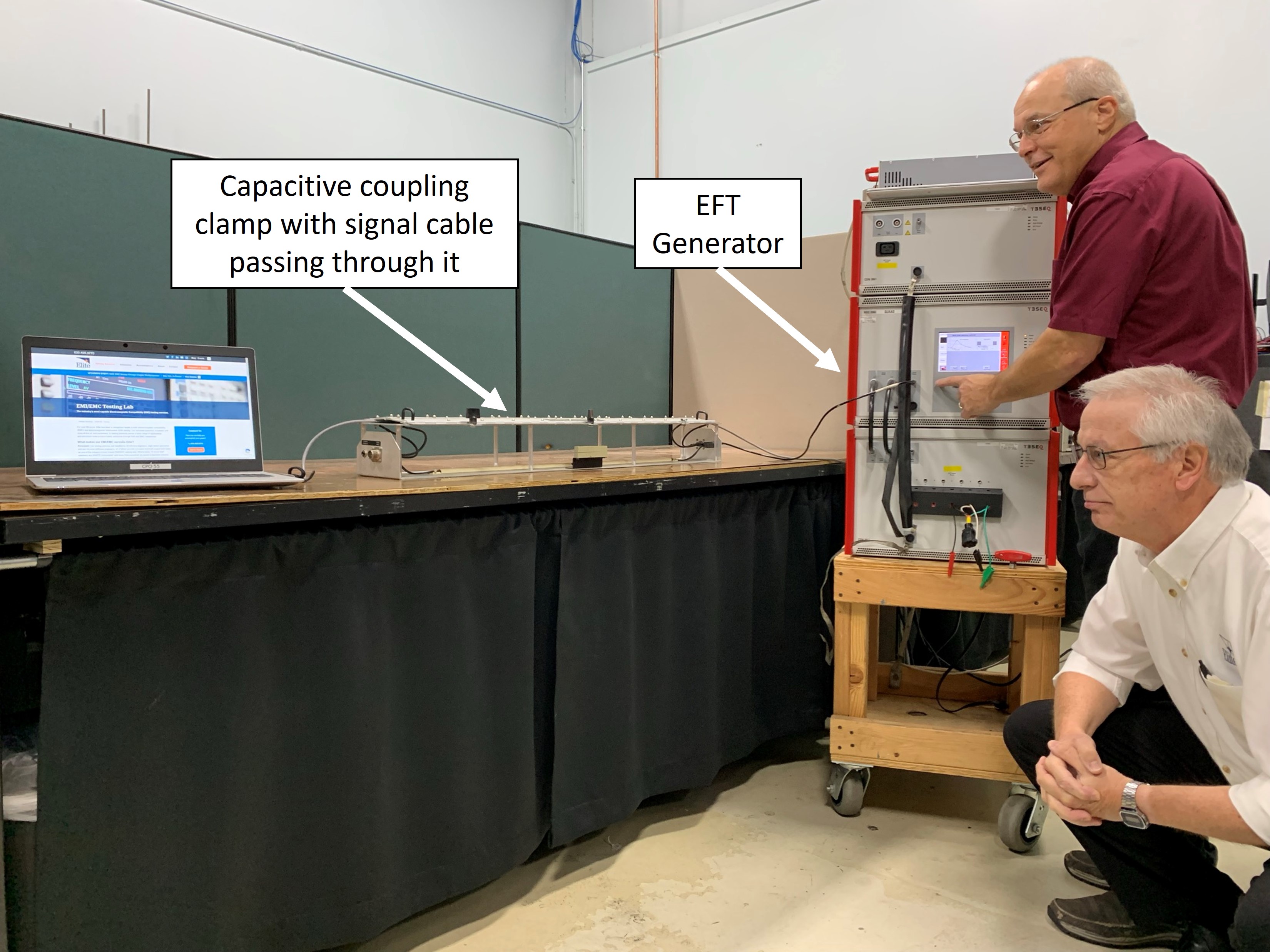 Lower image: Photo showing coupling clamp during an EFT test in the lab.

These tests are best done in a laboratory, but if that’s not practical the test can be done in situ (on site in its installed condition). The IEC 61000-4-4 standard shows alternative test configurations that can be applied.

The EUT is monitored for normal operation for the duration of the test and any responses are recorded.  The failure criteria defined in the test plan determines if the responses are failures.  If not, the EUT has passed.

If your product is to carry the CE Mark so that it is eligible for sale in the European Union, IEC 61000-4-4 is among the suite of standards it needs to meet.  Be aware of how your devices respond to an EFT burst. Then if your customers install your equipment near some heavy machinery, you’ll have fewer things to worry about.

Contact us today to get more information and schedule your product’s transient tests to achieve CE Mark compliance, along with the range of FCC, ISED, and others your product needs.  When your customers hear the big motors start up next to their site, they won't spend time recovering lost data and you won't spend time trying to find out why.

Learn more in A Seasonal Series on Transient Testing: Part 1 and Part 3, Part 4 and Part 5.