Lightning and Contacts and Sparks – Oh My!

When lightning strikes, it can cause damaging electrical surges near and far. Are your electronic devices protected from surges on power and signal cables? Elite’s Tom Klouda and Tom Braxton are back with the third installment on transient events and their testing techniques. Read more in Part 1 and Part 2.

Dark clouds move slowly as the sky changes from blue to purple. Rain begins to fall, and you hear distant thunder rumbling… Crack! Ka-boom! A flash of light and sudden thunder explodes with enough force that you can feel it.

Lightning strikes millions of times around the world and whenever it happens it takes us by surprise. But we share that surprise with our devices. A lightning strike is typically 300 million volts carrying a current between 10,000 and 200,000 amps, and all that energy has to go somewhere. Most of it goes into the ground and startles earthworms, but some is induced into power and signal cables.

If only one-tenth of one percent of that voltage finds its way into local wiring, that’s a 300,000-volt surge being spread around. It’s extremely brief and will quickly diminish, but it’s going to find its way into devices plugged into their power source. While not as dramatic, voltage surges are also produced from major power-system switching and short circuits.

Not to worry though – there’s a test for that. Elite’s Tom Klouda explains how it’s done.

The IEC 61000-4-5 standard spells out straightforward test procedures for surge immunity. The equipment under test (EUT) is connected via its power cables to a coupling-decoupling network (CDN), which is connected to a combination wave generator that creates the test-surge waveform, shown in the images below. The generator output waveform is defined for both voltage and current.

The levels applied during the test are chosen based on the severity levels appropriate for the EUT. The selection of test levels is shown in the table below.

Because electrical connectivity can be varied (single-phase AC, three-phase AC, DC power source), the form of the CDN is varied as well. The image below shows the connectivity of the CDN is shown in its simplest form. The combination wave generator is capacitively connected to the power lines going to the EUT and the decoupling network prevents the surges from going back into the power source. 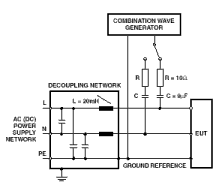 Tests are done in configurations of line-to-ground and line-to-line, and in multiple combinations when three-phase power is involved.

The EUT is monitored during the test, with any response noted along with the test levels and operating conditions of the EUT.

Tests are also performed on interconnecting signal lines if the EUT has signal paths that could be affected by induced power surges. IEC 61000-4-5 specifies the CDN connectivity for both shielded and unshielded cables. As an example, the image below shows the configuration for shielded interconnecting cables.

The real value in this test, as for all immunity tests, is in the test plan. The test plan gives the EUT’s description as tested (model, version, connectivity, supporting hardware, etc.) and defines its failure criteria: what should the EUT be doing during the test and what should it not be doing? Any responses in the EUT are noted so that a determination can be made whether the response was acceptable or if it was an actual failure.

At Elite, we’ve tested hundreds of products for surge immunity. We draw on that experience for pre-test advice, compliments of our Regulatory EMC Team Leader, Rick King, NCE, shown in the photo in Elite’s surge-test lab.

Rick reminds clients to confirm the suitability of their transient voltage suppressors (TVS) and to keep in mind that TVS ratings should be chosen based on not only the maximum applied surge levels, (i.e., +/-2kV), but also considering that lower amplitudes of 500V and 1000V are generally required to be tested. Excessive surge energy can enter the EUT if the TVS does not clamp at the lower levels.

Rick also cautions that the lab’s surge coupling networks contain inductors which may create problems for switched-mode and pulse-width modulated (PWM) power supplies. The problem manifests itself as the test item’s inability to power-up during the surge test. Check Annex I of IEC 61000-4-5 for an explanation of this issue or contact Rick King at Elite for more insight.

Lightning and unexpected switching events are going to happen. You can rest assured that with Elite’s deep experience in surge-immunity testing you’ll know how your product is going to behave. Your customers will be much happier when your product continues to work even after those lightning flashes make them flinch.

Contact Elite with your questions on product testing and confirm your compliance before lightning strikes.

Learn more in A Seasonal Series on Transient Testing: Part 1 and Part 2.