A Sudden Spark Made My Screen Go Dark

Electrostatic Discharges (ESD) are everywhere. We feel them when we reach for a doorknob, a car-door handle, or pull off a sweater. Your electronic products feel them too, and often not in a good way. False displays, logic upsets, or even component damage can result.  In Part 4 of Elite’s transient testing series, Tom Klouda and Tom Braxton show how an ESD test is done and why you need to know more about it. Read more from our transient series in Part 1, Part 2, Part 3, and Part 5.

It’s a brisk morning in January and you slide off your coat, settle in the chair next to the equipment bench and rub your hands together to get the chill off your fingers.  Rolling over to the bench, you reach for the power switch on the laptop and – zap!  Your arm jerks back and the screen has gone to blue. Reboot and hope for the best.

You could change a few details in this story, but we’ve all had this experience.  It doesn’t have to be a cold day in January – it could be any time of year in any office or lab.  Electrostatic discharge (ESD) has raised its head and bit your finger. ESD also bit the laptop, but the machine doesn’t have an arm to jerk back in response.  The laptop was knocked down after taking a punch and is getting back on its feet. You hope to see that no data was corrupted when it comes up again.

Digital devices are especially vulnerable to ESD upsets. The actions described above can build up a charge of 20kV or more between the finger and the surface. The current level is extremely low, but a jolt that size can throw off a device’s internal clock and, in the worst case, damage semiconductor devices.

IEC 61000-4-2, the basic standard for ESD immunity testing, spells out voltage severity levels, test environments, and test procedures.  Those specs aim for test repeatability while simulating a condition that is inherently not repeatable.  The table below shows the voltage severity levels for two different discharge types, contact and air. 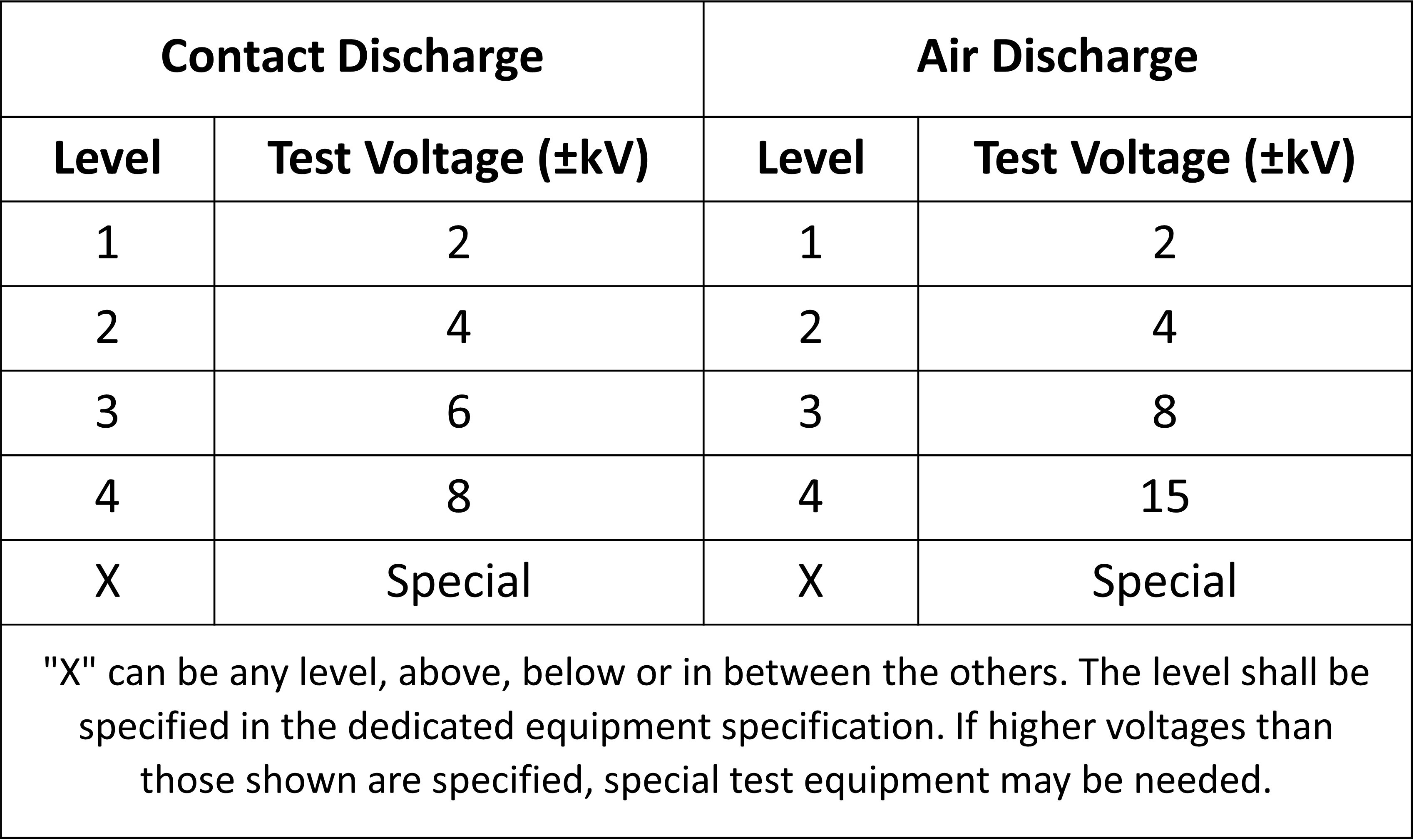 Contact discharge (sometimes called “current injection”) is performed when the tip of the ESD test instrument is touching the test-point surface before the discharge is applied.  This simulates the case when there is direct contact between the EUT and the discharge source, as shown by Elite test engineer Brelon Weathersby in the figure below: 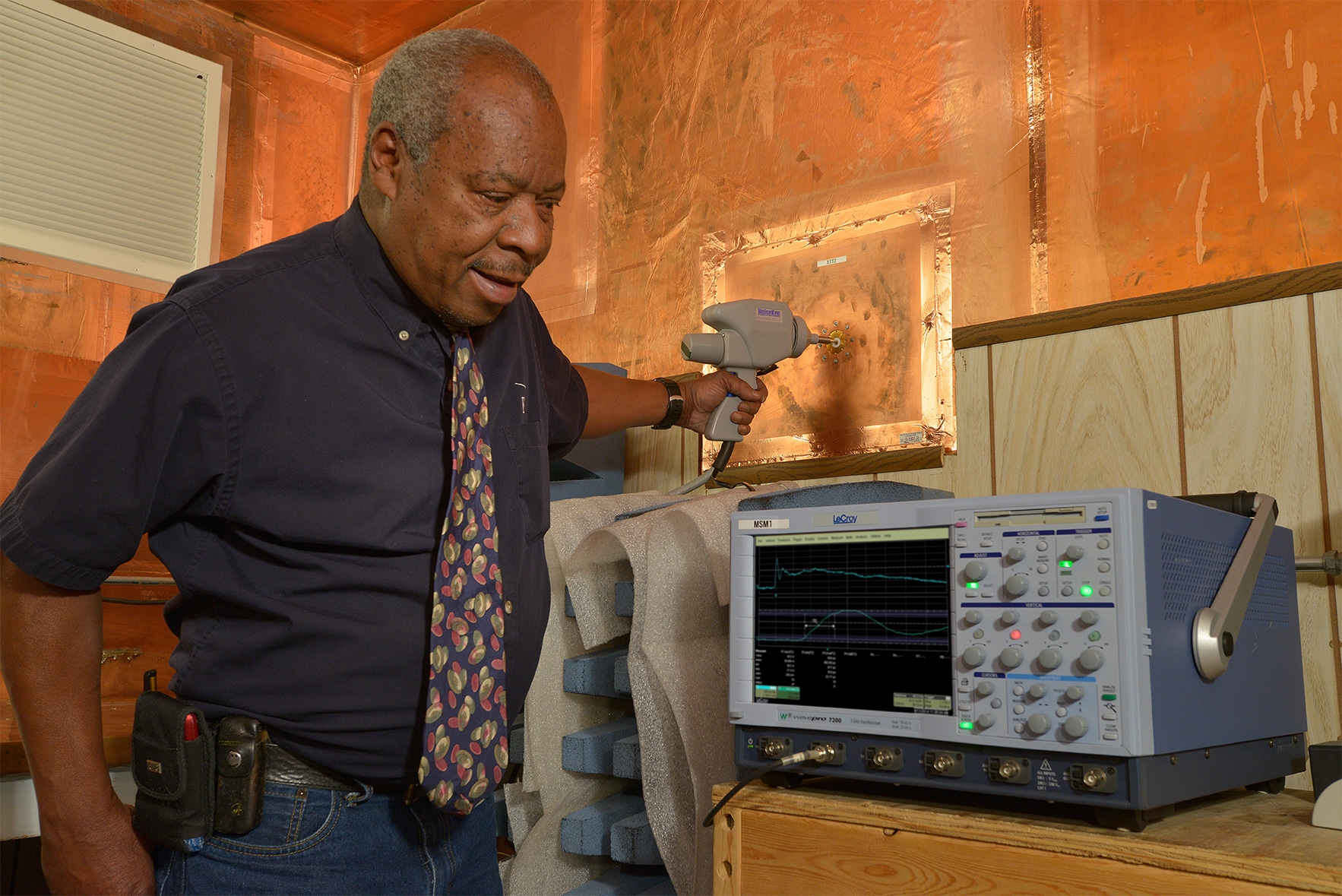 Air discharge is, as the name implies, a discharge passing from the instrument tip through the air to the test point. The illustration below shows the path of an air discharge. 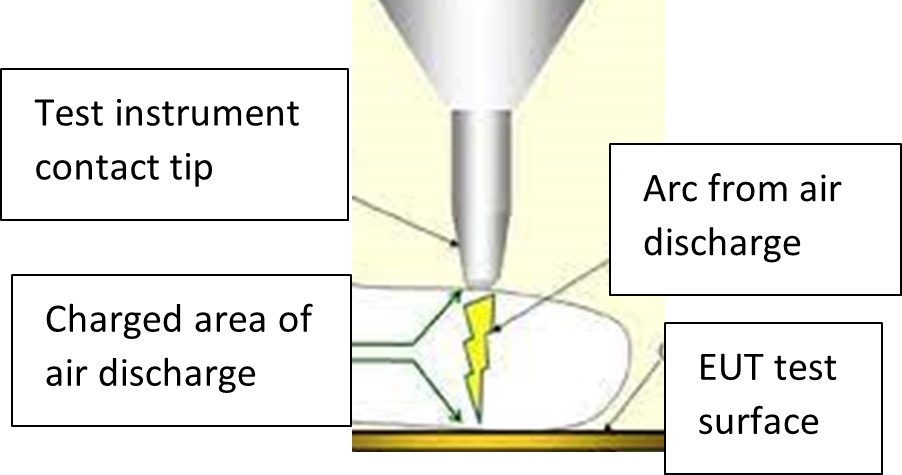 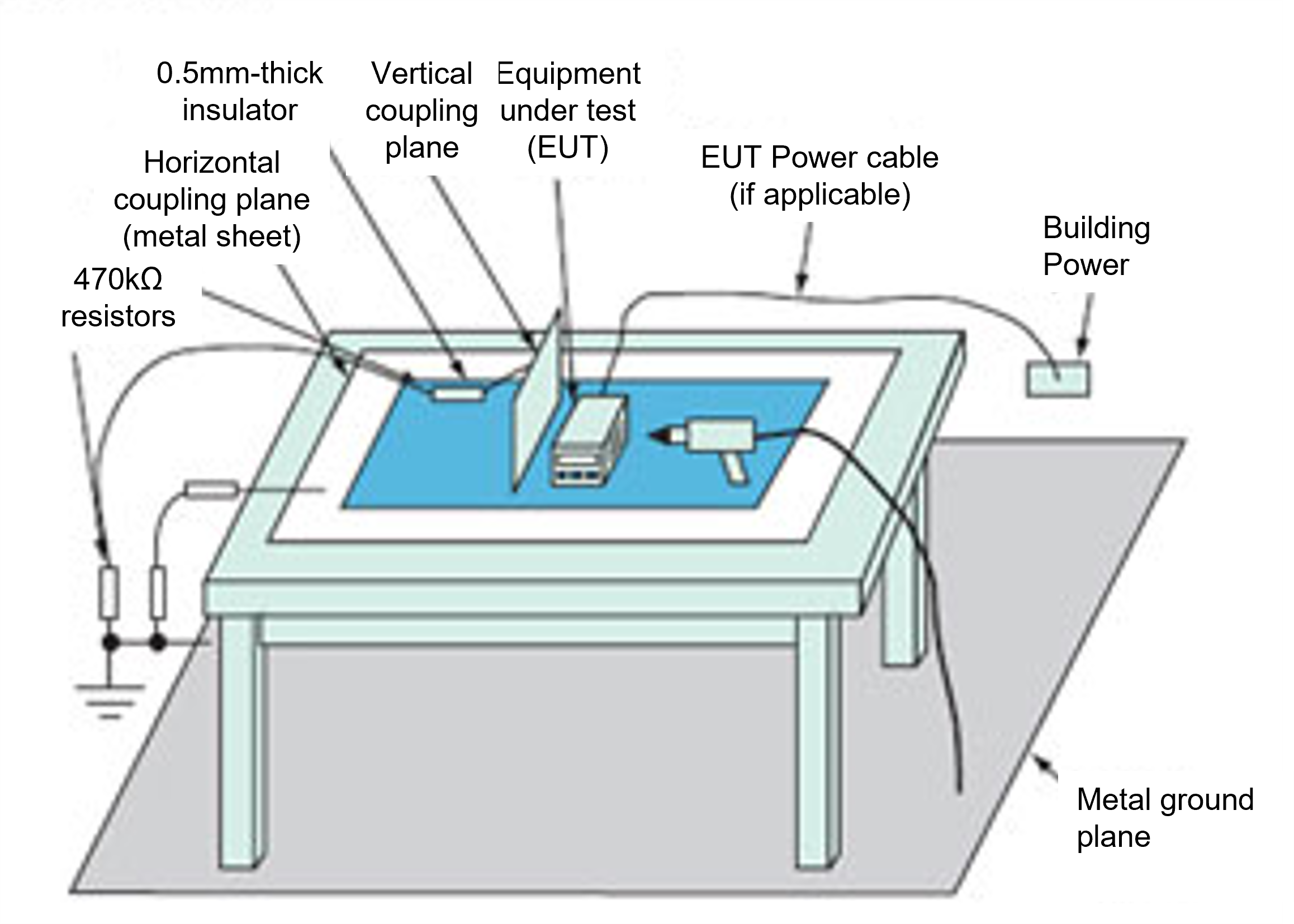 ESD behavior is statistical.  The equipment under test (EUT) can be zapped in the same place at the same level under the same conditions, and fail every time, half the time, or 1% of the time.  That’s why the standard calls for a minimum of ten discharges at each voltage level, negative and positive.  If a device is tested a 2kV, 4kV, and 8kV, at both polarities, that would mean 60 discharges at that test point.  If the EUT has ten specified test points, there would be 600 discharges applied.  It’s easy to see how that number could grow for a more complex EUT.

Any device going through an ESD test needs a test plan showing the EUT’s configuration and test point locations. Test points are chosen based on how likely they will be zapped in actual use.  For example, anywhere hands are going to touch, such as control panels and cable connectors, are obvious test points.  Conductive surfaces get contact discharges, and non-conductive surfaces (plastic enclosures, painted surfaces, etc.) get air discharges.  If an air discharge can’t be generated because the surface is heavily insulated, the non-discharge is noted along with other results.

Maintaining a record of the results is critically important.  The test plan will have defined failure criteria stating what is acceptable and not acceptable.  If the EUT responds in any way (blinking lights, interruptions, etc.), those are noted for the voltage level and polarity.  After many discharges a pattern might become apparent, and that is useful information for those responsible for the product.

The final report emerging from an ESD test may contain a pass-or-fail determination, but it might be a set of data noting only the responses to the various discharges.  Those results are inconclusive and require engineering judgments to be made by the EUT’s responsible engineer.  An example of an inconclusive result is a toy that had flickering lights during the ESD test – was that a failure?  Maybe not, since it’s not a safety hazard or a loss of function.  On the other hand, it could be a hazard for critical displays like fluid levels if ESD causes erratic flashes.  These are the types of judgments that are made to determine whether an EUT’s response is actually a failure.

As with any transient phenomenon, the first order of business is understanding the EUT’s failure criteria. The upfront work to craft a test plan will take some time, but it will save both time and uncertainty when the results are known.  A thorough ESD test could have predicted the blue-screen reset seen after you slid into your chair and rolled near the bench. Better to know that might happen before your customer is charged to 20kV and finds out the hard way.

Contact Elite for more information on planning and executing your ESD immunity test.  You’ll be glad you did.